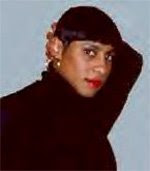 She began writing mainstream stories with romantic elements, always envisioning stories that had a broad appeal. Plus, she just loves a "happily ever after." She told me, however, that she feels both romance and erotica each offer their own challenges.

"In 'straight' romance, the author has to keep the story interesting to the reader with some form of sexual tension and not necessarily let the H/H consummate their relationship," she explained. "Like in real life, it's not always easy to stop a sexual encounter when the spirit moves people/characters. In erotic romance, the challenge is in keeping the sex interesting and exciting after more frequent encounters (kind of like the challenge between couples who have been together for a long time) and making the encounter serve more than just the one purpose of titillating the reader. The author has to make sure that the encounter reveals character and moves the story forward."

She would never skimp on the story just for the sake of sex in the story, she said. "In a good erotica, all—sex, quality, story—should co-exist."

Gracie feels that there are many public misconceptions about erotica. Some of these, she feels, are that it's dirty, all about sex, and only an excuse to string together a bunch of sex scenes. That there is no literary value or any other redeeming qualities of good fiction.

"Actually," she said, "these are the same misconceptions some people have about 'straight' romance, except with erotica the misconceptions are on a larger, more intense scale."

I asked Gracie how she did research for her books.

"I do most of my research on the internet. I have interviewed people in a certain profession to get a better idea of what my characters’ day to day life would be in that career (e.g., firefighter)," she explained. "Recently I watched The History of Sex on the History Channel for research. This and shows like it (e.g., HBO’s Real Sex series) are great resources for erotica authors and just plain interesting and fun to watch."

Gracie's family is not only very supportive of her writing by purchasing and reading her books, they are also actively involved in her career.

"My younger sister and niece have gone to several book signings and festivals with me," she said, "and my mother carries and hands out my business cards and talks up her author daughter whenever she can. My younger brother has recently appointed himself my agent and is busy researching venues other than bookstores that would be viable to conduct book signings."

And, I asked her for her favorite book.

"Wow, another tough question," she responded, "and again, I just can’t narrow it down to one, but Natural Law, Holding All the Cards and Rough Canvass all by Joey W. Hill have to be at the top of my list."

On a personal note, if Gracie could be anyone she wanted, she would choose to be Channing Tatum.

I also asked her if she had to get a body part pierced, what part she would choose.

"Other than my ears, which are already pierced, if I had to pierce a body part (and we’re talking under threat of death) it would be my nose, probably because it’s the least painful area, as opposed to others, that can be pierced," she said. "At least I think it would be the least painful. I don't necessarily find body piercing sexy, unless it's on a male." She laughed and continued, "Must have something to do with deep-seated djinni and pirate fantasies."

She finds chocolate syrup and whipped cream perfect for eating off almost any body part, and her favorite food is her mother's fried chicken. She cannot, however, bring herself to eat raw clams.

I asked her, "What is your strangest habit?"

"This is a carry-over from my finger-sucking days (don't ask). I rub my eyebrows the wrong way," she confessed.

Her favorite letter is "F" and she rarely paints her fingernails or toenails.

"When I do," she said, "it’s usually clear or neutral colors, or French manicure."

"They can’t be shy. Even if they are shy, they can’t let their characters be shy, not about his/her sexuality," she said. "I think an author who wants to write erotica should be willing and open to learn about different aspects of sex and relationships and the different forms of sexuality—both negative and positive elements. Even if it’s an aspect that the author may find personally repugnant (e.g., bdsm, fetish/kink), it doesn’t hurt to know about said aspect. Somewhere along the line the author may add this element to a character’s history if only for the reason of showing what a character doesn’t like or might find personally repugnant. An author can’t let what he/she would or wouldn’t do (sexually) influence what his/her characters would or wouldn’t do. It’s not the author’s job to make moral judgments about his/her characters."

You can keep up with Gracie on her website, http://www.graciecmckeever.com
Posted by Long and Short Reviews at 4:00 AM