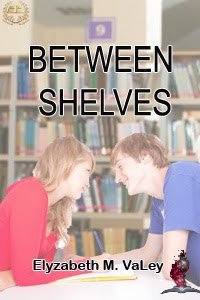 Between Shelves
by
Elyzabeth M. VaLey

Melanie looked at Justin from across the table. He had his head down, his dirty blond hair falling in loose strands over his eyes as he read. He swept them away with irritation and scribbled some notes.

She bit the tip of her pen and tapped her foot impatiently. She sighed. She had been staring at Justin out of the corner of her eye for the past hour but he was oblivious. She knew she was supposed to be studying for her master’s exam but she couldn’t concentrate, not when Justin’s frown reminded her of the look he had when he made her orgasm.

Melanie glanced around her. The library was practically deserted. Her pulse raced. Would she dare? Their desk was partially hidden by shelves and they would only be visible if someone came to stand right next to them. Justin groaned in frustration. Clearly, his study session wasn’t going well. He needed to relax. Heck, she needed to relax. If anyone came upon them, well...

Quietly placing her pen on the table, Melanie pushed back her chair. She held her breath. Justin remained unmoving. She grinned and slowly lowered herself to the ground. She crawled the short distance to Justin’s legs and placed her hand on his well-endowed package. Justin jumped and swore under his voice.

“Melanie!” He lowered his head to glimpse at her under the table. “What do you think you’re doing?”

Melanie laughed, amused. “Study and try not to squirm too much,” she ordered with a silent giggle. Justin groaned but did as he was told. Already she could feel his cock hardening in her hand. Carefully, she lowered his zipper and released the growing member. She caressed it in her warm hands, enjoying the silky feeling.

“Melanie,” Justin growled at her. She giggled again before kissing the base of his cock. Justin jumped in her hands.

Slowly, she licked his shaft from the base to the top. She repeated the process. She heard Justin’s labored breathing and had to suppress back a moan. Liquid rushed to her core, heating her inside and out. A thought occurred to her. Quickly, she released her hold on Justin and undid the buttons to her blouse. Her eyes met Justin who had bent over to see why she had let go of him.

“You’re crazy,” he stated as he watched her with eager eyes. Melanie nodded and unclasped the front of her bra. Her breasts fell free. Justin made to grab them but she playfully slapped his hands away.

He ruefully obeyed. Settling herself on her knees once more, Melanie took his stiff cock into her mouth. She settled herself over the bulbous top for a moment, swirling her tongue slowly. Cupping his balls, she pressed them softly as she lowered her head, little by little, swallowing his engorged member. She lifted and lowered her head, teasing him while taking more of him into her mouth. Above her, she heard Justin’s harsh breathing, a soft moan erupting from his lips when she flattened her tongue over the base of his cock. Searching blindly, his large hands found her breasts and pinched her nipples, enticing a moan from her. With thumb and forefinger, Justin rolled her nipples, causing a steady thrumming to grow between her legs.

Abruptly, she released her hold on him. She looked around in haste and her heart climbed to her throat as she observed on the other side of the bookshelf a pair of feet. She waited for a few minutes, afraid that someone had spotted them. Barely a few seconds later, the feet shuffled away.

Relieved, Melanie observed the virile member before her. She wasn’t one to let things unfinished and she wasn’t about to start today. Both she and Justin were going to find release right then and there. Resolute, she accommodated herself between Justin’s legs. Kneeling before him, she grasped her own breasts and arranged them around his prick. She licked the head of his shaft and began rubbing her breasts against the solid member. She moaned as pleasure cursed through her at the contact. She tugged at her own nipples as she increased her speed. Justin groaned and she knew he was close. She wrapped her lips around his cock and lowered her head one last time. Justin pressed his hands to her breasts, trapping his cock between them. She whimpered in both surprise and pleasure at the gesture. Justin swore under his breath and the next thing she knew he was coming into her mouth. Eagerly, Melanie swallowed the thick strings of come. When he was done, she smoothly licked him clean, zipped up his pants and sat back.

Justin stared down at her and she wondered at her appearance. She gingerly passed a hand through her hair trying to smooth it out. Her body shook and her thighs felt wet. Her breasts were tender and she longed to have Justin’s mouth on them, but knew that under the current circumstances it was impossible.

Justin smiled. His blue eyes shone mischievously and she suppressed a shiver. What did he have in mind?

Melanie nodded. She knew that dangerous tone and this time she did shudder. Whatever he had in mind, she knew she would enjoy it.

“Button up your shirt and come sit next to me, sweetheart.”

Hastily she fastened her bra, buttoned her shirt, smoothed out her hair and adjusted her skirt. She glanced around before climbing from under the table and setting herself next to Justin. While she had been fixing herself, Justin had moved her books and pens to his side. As soon as she sat down, he hugged her to him and found her lips. Melanie moaned into his mouth as his tongue danced with hers.

“Are you wet, sweetheart?” he whispered against her lips.

“How wet?” he asked while taking his time in caressing her inner thigh.

“Put your hands on the desk where I can see them and don’t move them.”

Melanie obeyed without protest. Justin chuckled. His large hand finally reached the triangle between her legs. He cupped her soaked panties. Melanie lurched forward at the contact. His hand was so warm. Even though her pussy was on fire his heat was searing through her. More liquid rushed to pool between her legs and she bit her lip in agony.

Justin rubbed his knuckles against her cunt causing her to bite into her lower lip again. Tortuously slowly, he wound his way under her panties. She grabbed the edge of the table until her knuckles turned white. Justin took his time, lightly caressing her wet lips with a single finger.

He inserted another finger and Melanie bit back a moan as he leisurely took his time exploring the outside of her soaking pussy. Finally, when she was about to despair, she felt his thick fingers begin to push inside her. She whimpered in delight. At a snail’s pace, he pushed them inside until he could go no further. Melanie pressed her thighs together trapping his hand. Justin chuckled.

“If you don’t relax your hold I won’t be able to pleasure you, sweetheart.”

She nodded and released her grip on his hand. She was rewarded by the feeling of another finger slipping into her. Justin began a constant seesaw movement into her. He’d mix it up by rotating his fingers inside her cunt. Melanie rocked her body. She closed her eyes, pleasure slowly building inside her. Suddenly she heard feminine laughter and footsteps. Her eyes popped open. She stared at Justin but he continued his ministrations oblivious to the sound of people approaching.

He captured her mouth into his and she lost all sense of direction as at the same time his thumb flicked her clit, once, twice, thrice. Her body exploded into a million little pieces. Her wail of pleasure drowned into his mouth as her vagina contracted in spasms and liquid dripped onto Justin’s fingers, her thighs and even the seat.

When her body finally began to relax, Justin released his hold on her. Melanie opened her eyes. Two tables away the group of girls she had heard laughing were settling down, opening books and chatting quietly. Justin glanced at her, a merry twinkle in his light eyes.

“How about we continue this study session at home, sweetheart?”

With a peck on his lips, Melanie agreed wholeheartedly.

About the Author: Appearances are deceiving. By day usually shy and quiet; another face in the crowd. By night Elyzabeth’s calm demeanor transforms. Words flow from her fingers giving life to elaborate fantasies of love and desire. Visit her realm at www.inadreambeyond.blogspot.com.
Posted by Long and Short Reviews at 4:00 AM