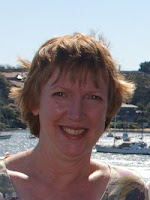 A.B. classifies her work as gay romance, but realizes that in the publishing world, any romance between two men is immediately classified as "erotica" even though the level of sex in the story may be tame by comparison to some New York heterosexual romances.

"Mind you, if we believe everything we read in the m/m genre, with men everything revolves around sex, so the erotica tag would stick."

A.B. is not a homosexual male, but she wants to portray her characters as accurately and with as much respect as possible, so she has done a lot of reading –both fiction and nonfiction—written by gay guys and people who are not homosexual.

"One of the problems dealing with any sex, group, age, whatever, is that we shouldn't make blanket statements. I also don't want to perpetuate inaccurate stereotypes," she said. "I've been lucky that a few male m/m writers have been incredibly generous with their advice and feedback. I've been in contact with William Maltese, Josh Lanyon, Patric Michael to name just a few and all have helped by shedding light on popular misconceptions.

"For example after reading his novella Timeless, which explores the concept of friendship between two males, I had an amusing discussion with Patric about the amount of pre-cum some writers seem to think all males have.

"Josh is always at me to 'Man 'em Up, Dude.' I sent him one of my WIPs for his script evaluation service, partly because I needed help with the structure of the book which is a dual first person POV which backtracks like a Rashomon, but I also wanted his opinions about my characters. Were they believable?

"Well, when it came back, my manuscript was littered with comments like: 'This is such feminine thinking', 'These guys all act like thirteen year old girls', 'These blokes do a lot of shivering and shuddering.'"

A.B. said one thing she didn't want to do is write "chicks with dicks" like some other m/m authors do. She's afraid that one reason the percentage of males who read m/m is low might be because they can't identify with the male stud protagonists any more than she could identify with the beautiful, dainty but strong female protagonists that turned her off m/f romance in the first place.

"Did you always start out to write erotica?" I asked.

"Definitely not." She laughed. "My original aim was and still is to write a 'diary' of a historical figure. I did three years of research which I still plan to use. As the character is a male, I felt I needed to learn how to write his dialogue and inner thoughts convincingly. This led me by a circuitous route via Denise Rossetti to Aleks Voinov and Special Forces and then to Josh Lanyon. I'm still talking to guys who write and searching their work for that elusive difference.

"Are we different inside? Do males and women think differently? Can you tell if a book is written by a man or a woman? I've been editing a couple of f/f books which have actually been written by heterosexual males. Is that fact detectable in their writing? Are we annoyed if we're misled about the sex of the writer? Are we pushing our characters into gender stereotypes? In some ways, the longer I'm in the business, the more questions get thrown up. I've been accused lately about making too many assumptions and generalizations.

"Perhaps that's the advice I'd give any new writer. Everyone is different. Search out the difference in your character, your plot, your backstory, the thing that will make your book worth publishing and worth reading. Write from the heart."

I asked A.B. what her most embarrassing moment was and she told me, "It's coming up right now. I'm in my late fifties. I don't know how old your readers are, but I suspect some said good-bye to menopause some time ago. One of the best by-products I found of reading erotica is that I can now say good-bye to the K-Y jelly! Is that embarrassing enough for you? No, seriously, it works. Maybe that's what we should say to all the critics. Reading erotica is much less likely to cause cancer than hormone replacement therapy. "

I also wondered what food she thought was best for eating off another person's tummy or other body part.

"Depends on the person," she assured me. "If it was Hugh Jackman, I'd say something that wouldn't come off very easily, so I’d have to work really, really, really hard to get it off. Something incredibly sticky. Sorry, my brains so busy imagining doing it, I can't really concentrate on the answer! Other body part? Hm, honey coated dick? You did ask! Though on second thoughts, honey might be too sweet. Again, I'll have to think long and hard about that one. Maybe experiment a little."

However, there are some foods she can't bring herself to eat.

"I'm afraid I'm a bit of a gastronomic wimp," she said. "I've never eaten an oyster and I'm not going to start now. Ditto snails. My Mum made us eat animal organs such as brain, kidney, liver and tripe. Yuck. One of the first things I found I had in common with my husband was how long we'd sit there stubbornly refusing to eat them! Why eat parts of the body that were designed to eliminate waste products?"

"What's your favorite letter?" I asked.

"One that says my book's been accepted for publication. Oh, you didn't mean that kind of a letter? Well, why didn't you say so? The letter X as it stands for a kiss or the unknown."

She closed with, "All in all, I have to thank everyone who gave me the courage to try to be a writer. I'm still not convinced I am, and probably will have these self-doubts till I've a few successful books out there. Thanks, Marianne and Judy, for having me on Whipped Cream. I hope I haven't bored you all senseless. Without sites like yours and the great readers who frequent them there wouldn't be a world for my books to live in."

You can keep up with A.B. on her blog, http://www.abgayle.com/blog.html
Posted by LASR/WC/A Admin at 4:00 AM